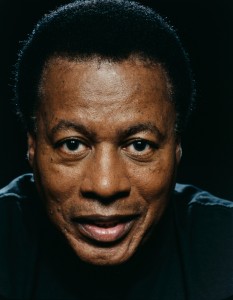 Well, where to start? The problem with the enigma that is Wayne Shorter is how to talk about much that is both loose and tight, spontaneously improved and painstakingly written. The answer might be to begin with what Shorter’s late partner Joe Zawinul said about their group Weather Report – “We always solo and we never solo.” That’s what it felt like listening to this remakable quartet performance.

At 78, Shorter should be thinking about what good buddhists do and retreating to a mountain hilltop somewhere. Instead, over the last ten years he’s been working with the tightest rhythm section in jazz (Brian Blade and John Patitucci) and Panamanian pianist Danilo Perez who adds his shards of twisted latin rhythms and harmonic invention to Shorter’s own asymmetric compositions.

The quartet began with Shorter laconically undecided about participating at all (or so it seemed): trace elements of a composition picked up and then thrown aside while Perez invented tiny melodies and rhythms and Patitucci and Blade traded licks. We waited and wondered.

But suddenly it all came clear – Shorter (rather surprisingly) switched to soprano and took off with Lotus, a piece comissioned by the Philadelphia Musuem of Art and apparently inspired by their pan-Asian collection. Shorter was magnificent – that clear, keening soprano shriek created new structures out of some edgily familiar music – a version of She Moved Through the Fair and a fantastic take on the old Weather Report tune Plaza Real. And can you believe for a second rapturous encore a spikily engaging version of Fred Astaire’s Flying Down to Rio? Shorter’s purity of tone, wit and invention teased out the tune, then forensically picked it part before putting the whole thing back together as a Wayne Shorter original.

This wasn’t part of the upcoming London Jazz Festival but audiences for that will be hard-pressed to see anything which matches Shorter’s dazzling virtuosity backed by his  his stunning quartet.

“Life is so mysterious, to me,” says Shorter. “I can’t stop at any one thing to say, ‘Oh, this is what it is.’ And I think it’s always becoming, always becoming. That’s the adventure. And imagination is part of that adventure.” And – yes – that’s just about the size of it.