This week’s show crammed in more music than you would think possible. As promised, there were tracks from some of the best new releases and reissues of the last few months including Charles Lloyd, Jamieo Brown, Rez Abassi, Fat Freddy’s Drop, Geri Allen and K Def.

There were also appearances by Cosmic Jazz favourites Jackie McLean, Sun Ra, Emanative and Cannonball Adderley. The success of a track from Adderley’s live album The Black Messiah on CJ a couple of weeks ago prompted more from this prolific late period of his career. He moved deeper into electronic experiments as evidenced by this track from the Experiment in E album, recorded with influential jazz-rock produced David Axelrod who stayed on board for most of Adderley’s output before his early death in 1975. Axelrod (who will feature on subsequent CJ shows) brought his combination of baroque orchestrations and a very forward drum sound into the jazz mix. He was then much sampled by the hiphop world, including DJ Shadow who used the theme of his The Human Abstract for his Midnight in Perfect World track on the influential Endtroducing album. 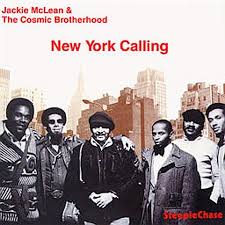 Calling album from 1974. After the end of his long Blue Note contract, McLean signed with Steeplechase and recorded some great late material – including this. McLean’s band, the Cosmic Brotherhood, play with passion, fury, and intelligence. The group, a generation younger than the leader, has a sound that is definitive ’70s advanced hard bop and in addition to great chops, the band has strong writers in trumpeter Billy Skinner and new CJ fave pianist Billy Gault. The tightly voiced arrangements are punctuated by roiling power surges from the rhythm section, which includes the drummer Michael Carvin, whom McLean had used on his previous session Antiquity. McLean’s son René joins in on tenor, alto, and soprano sax and he gives all the players plenty of room. The result is that the date bears the stamp of his whole band’s artistry as much as his own.

Video this week comes from Jackie McLean, just two years before before he died, with a new group also featuring his son Rene: