16 April was Record Store Day all round the world and – of course –  Cosmic Jazz joined in the festivities.  We visited two of our local record stores –

Soundclash Records in Norwich and Vinyl Hunter in Bury St Edmunds. Soundclash is one of the city’s oldest record shops: established in 1991, it’s got a great selection of both vinyl and CDs in a wide range of musical genres. Vinyl Hunter maybe new in town but it’s already building a loyal customer base.  Not only is it a specialist vinyl store (with some CDs) but there’s cafe space downstairs too and – thanks to the bakery upstairs there are excellent cakes and coffee. Vinyl

Hunter also carries a range of quality turntables including Lenco and Rega models – and co-founder Rosie Hunter made clear that selling good quality decks on which to play both new and secondhand vinyl is just part of their comprehensive service for customers. 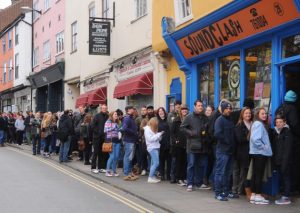 Those early morning Soundclash queues are testimony to the appeal of Record Store Day and – like the Norwich store – Vinyl Hunter had a busy inaugural RSD2016 with over 60 customers buying in the first hour. Their crate digging approach is going global too – in August the Hunters will be visiting Brazil for the Olympic Games, but Rosie confirmed that there will be time for some vinyl hunting in some of the country’s best record stores!

UK vinyl sales continue to grow year on year with a 64% increase in 2015 sales over the previous year. What looked like a passing fad is clearly now a substantial resurgence. Independent vinyl shops are a viable business proposition – the longevity of Soundcla

sh and the customer service ethos of Vinyl Hunter are both testimony to this. What HMV (the sole surviving major music retailer) never succeeded in doing was to rebrand themselves as a specialist, niche service – and that’s where two of our local record shops have the edge. Cosmic Jazz salutes both. For more vinyl news, start with The Vinyl Factory or sign up to any of the other great independent record store around the country.  The music choices below celebrate RSD exclusive cuts and more – enjoy!

Meanwhile, our Miles Ahead fest continues: Neil has chosen five Miles Davis tracks, each of which featured in Jez Nelson’s Sunday night Somethin’ Else progra

mme on Jazz FM. Much of this is Miles music that is rarely heard on the radio – and as actor/director Don Cheadle notes in his interview with Nelson, some of these tracks often centre on “meta-Miles” – Davis playing what’s not there. The music built up to the period in Miles’ life that’s at the heart of the movie – his enforced retirement from 1975 that then led to the final comeback years. The interview ended with Cheadle’s choice of Circle, from the album Miles Smiles.

On Somethin’ Else Neil listened to: