The show this week was not the one I planned. I had worked out a carefully selected playlist, as usual, only to arrive at the studio to find a glasses case with no glasses. A quick search from my colleague found the first tune for me as I rushed to the car to find my driving glasses. These are not intended for close reading so this week’s show includes tunes whose titles I was able to make out on the screen. But – as it is with serendipity – the music works! 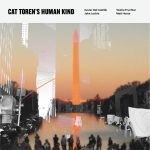 The first tune fulfilled a promise from last week when I went into raptures about the Cat Toren tune Soul. I expressed my feelings about this tune in last week’s Cosmic Jazz blog and Neil added much useful information. So I will say no more and hope that Neil can supply more of her music for future shows. [Neil notes] Yes he will! I feel the same about this excellent New York-based artist. It’s worth repeating some of the liner notes I quoted on this blog for last week’s show:

These compositions are inspired by both the free form jazz of the 1960s and a personal expression of the resurgent civil rights movement that is upon us. Jazz has always been music of expression and of the people. In the late 60s, as John and Alice Coltrane and their contemporaries were bringing jazz to new levels of experimentation and cross-culturalism, the sociopolitical climate was fraught with tension… America has come a long way, but this recent regression is a wake up call that the work is far from over.

And, of course, Toren is right. There’s a long history of jazz addressing civil rights issues and Toren and Harrold are just two of the many current musicians focusing on these issues in their chosen art form. Buy this music and you’ll help to benefit organisations fighting for civil liberties and human rights. Go to this Bandcamp link and download the Human Kind EP – then spread the word!

A familiar artist I could make out on the screen was Polish trumpeter Piotr Wojtasik (above) and, as any regular listeners or readers of this blog will know, I do not need much of an excuse to play his wonderful music, particularly from the album Old Land. It is uplifting music and with a poignant title to this week’s tune Recognition, Understanding, Acceptance.

There was a tune from a new Polish album Hourglass by the Szymon Lukowski Quintet. The leader plays tenor and alto sax and the quintet is made up with vibes and marimba, bass, drums and a featured guitarist from Austria, Hannes Riepler. As always with the East European  jazz you know where to find it – the ever reliable Steve’s Jazz Sounds.

Neil has a drummer of the moment and it is Makaya McCraven. He describes him as a beat architect. The album In the Moment comprises mostly short tracks recorded live and then edited, mixed and worked on in the studio. The result is something like the explorations of Teo Macero with Miles Davis – an innovative rewiring of the original jams.

A big favourite among many lovers of jazz-related music for the last couple of years has been saxophonist Kamasi Washington and what better way to  celebrate his 37th birthday than to play a track from his excellent 2017 EP Harmony of Difference. It’s a scaled down release after his 3CD masterpiece The Epic, but one well worth exploring. All the usual trademarks are there – a big sound, a big choir and a big-sounding lead tenor player. Great music.

It is not easy to take on a Fela Kuti tune. It was a risky move for the Ezra Collective, who are part of the new London jazz scene which is getting a lot of mainstream press attention at the moment. In fact, this year’s Friday lineup for London’s Field Day festival there’s so many of these new young artists it almost amounts to a (very welcome) takeover. The Ezra Collective certainly mix it up on their first EP with a melange of dub, jazz and afrobeat.  Their take on Fela’s Colonial Mentality is really inventive and the results are  surprisingly good – even to the ears of someone as besotted with his music as me.

The African feel continued with a track from The Oneness of Juju. James ‘Plunky’ Branch has led a number of incarnations of this group and this one produced the excellent Space Jungle Luv album. It was originally issued in 1976 and subsequently reissued by the enterprising Strut label, who also put out a now hard-to-find 2CD compilation. African Rhythms is a well anthologised tune though, and you’ll find it on a number of compilations. Early in his career, Branch recorded with the influential Strata East label and – by some accounts – knew both Sun Ra and Ornette Coleman. Pedigree… 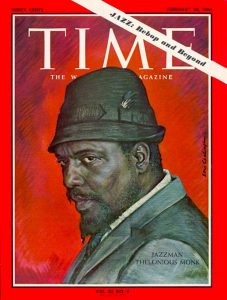 To end this week’s show we went back to a classic tune, but in a recently released version. Thelonious Monk’s Light Blue comes from the excellent 2017 release Les liaisons dangereuses, the soundtrack to Roger Vadim’s 1957 film. Along with Sam Jones on bass and Art Taylor on drums, the music features tenor saxophonists, Charlie Rouse and Barney Wilen. This 2CD release is a great lost great recording and well worth investing in to celebrate Thelonious Monk’s centenary year. Your jazz fact for this week is that Monk is (still) one of only five jazz musicians to have ever graced the cover of the celebrated Time magazine – an achievement not even Miles Davis realised. Genius.