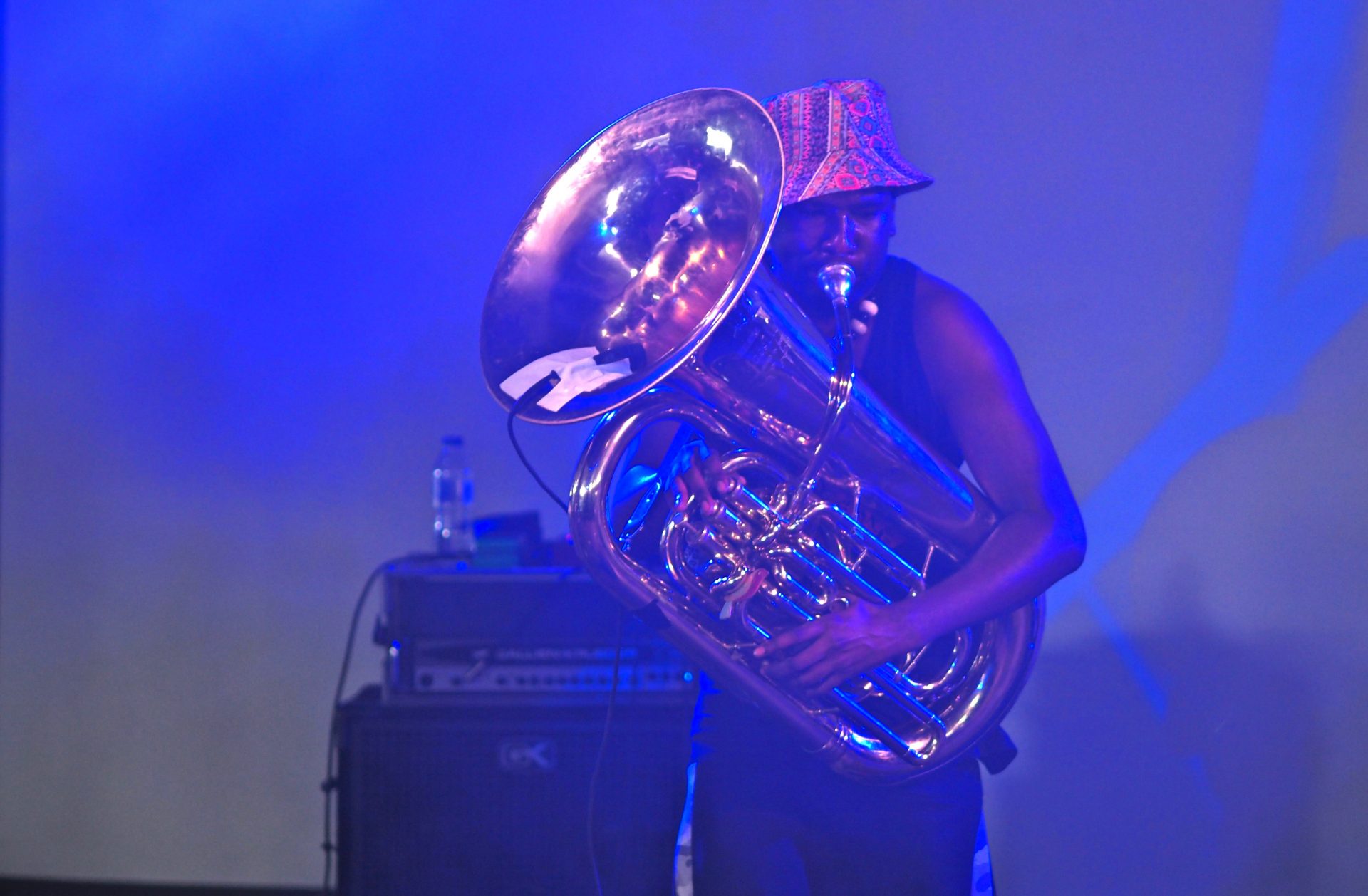 This week there was only one way to start the show. In the previous week I had been to three shows which represented the very best of the new wave of jazz and jazz-related music in the UK – the sounds of young London and truly jazzre:freshed. Our photo shows UK tuba player Theon Cross performing with Moses Boyd at London’s Field Day Festival – more next week.

nights of late-night music in the Adnams Spiegeltent erected in a city centre park. On the first night there was the sax and drums combination of Binker & Moses who respectively blew and drummed with tough intensity and relentless energy to the amazement and appreciation of the crowd. The next evening saw the young keyboard player Ashley Henry with his trio, and joined later by vocalist Cherise Adams-Burnett. The repertoire included original compositions, a re-working of a tune from rapper Nas and one from indie band Enemy. Ashley Henry is an exciting and developing talent with a debut album

forthcoming. The third night brought a performance from the six-piece Maisha led by drummer Jake Long. There was added excitement by the inclusion in the band of my pianist/keyboard of the moment Sarah Tandy. She plays with seeming nonchalance, with constant surprise and invention and with total involvement in the group. Another highlight was the deep interplay between Jake Long on drums and Tim Doyle on Percussion. Maisha played non-stop with no break for introductions or song titles until the end of the set. What a welcome change from the tedium of many jazz nights of the past.

There was more from Timo Lassy’s 2012 album In with Lassy, a joyful and uplifting work. The Finnish saxophonist has come long way since his days with the Five Corners Quintet and the tune It Could Be better has a soulful, gospel feel with pleasing contributions on the Hammond organ from Georgios Kontrafouris and Timo Lassy himself on tenor sax. As with Lassy’s great new album Moves, this one is recommended.

Gospel is a major inspiration for Polish tenor sax player Lukasz Juzko on his new album Breath from the Noise. He is one of the latest exciting East European discoveries we have come across from Steve’s Jazz Sounds. Juzko is from the Gdansk Academy of Music and included in the quartet is the pianist Michal Wroblewski, who we have come across already on Cosmic Jazz. There will be more from this a record in future on Cosmic Jazz.

Also with a Gdansk connection is the live album Copy & Insert from pianist Leszek Kulakowski and his Quintet. The Quintet includes another Polish musician familiar to Cosmic Jazz in Jerzy Malek on trumpet. Kulakowski himself has collaborated with a number of players both from Poland and the US, including Tomasz Stanko and Eddie Henderson. This album features American saxophonist Andy Middleton and was recorded in Gdansk at the XXIII Komeda Jazz Festival, commemorating the Polish jazz icon Krzysztof Komeda.

The Kulakowski track is entitled Japanese Tune and this prompted the inclusion of another tune from the J-Jazz album of great deep, modal jazz from Japan from 1969-1984. It came from guitarist

Kigoshi Sugimoto. The track has a great bass line running through with contemporary sounding drums in the background.  There’s a revival of interestin this golden age of Japanese jazz at the moment with a number of compilations for listeners to look out for. We’ve featured a number of tracks from the great J-Jazz compilation and  in upcoming shows we’ll move on the Jazzman label’s contribution to this genre – Spiritual Jazz Volume 8: Japan, another masterwork of crate digging.

This week’s show ended with another piece from the newly-released Mark Springer album Diving. The music was recorded live at a series

of concerts and the tunes were composed on the spot in response to the ambience, audience and the settings in both the UK and Italy. The selection this week was from a UK concert. Springer might be unknown to some listeners but he was a key player in a much earlier British jazz movement in the early 1980s when he led the group Rip, Rig + Panic. Their first album God was one of my introductions to contemporary jazz and the band went on to complete two more albums before disbanding in 1983. The first album featured Neneh Cherry on vocals and the second her father, Don Cherry on trumpet.

Derek is listening to …