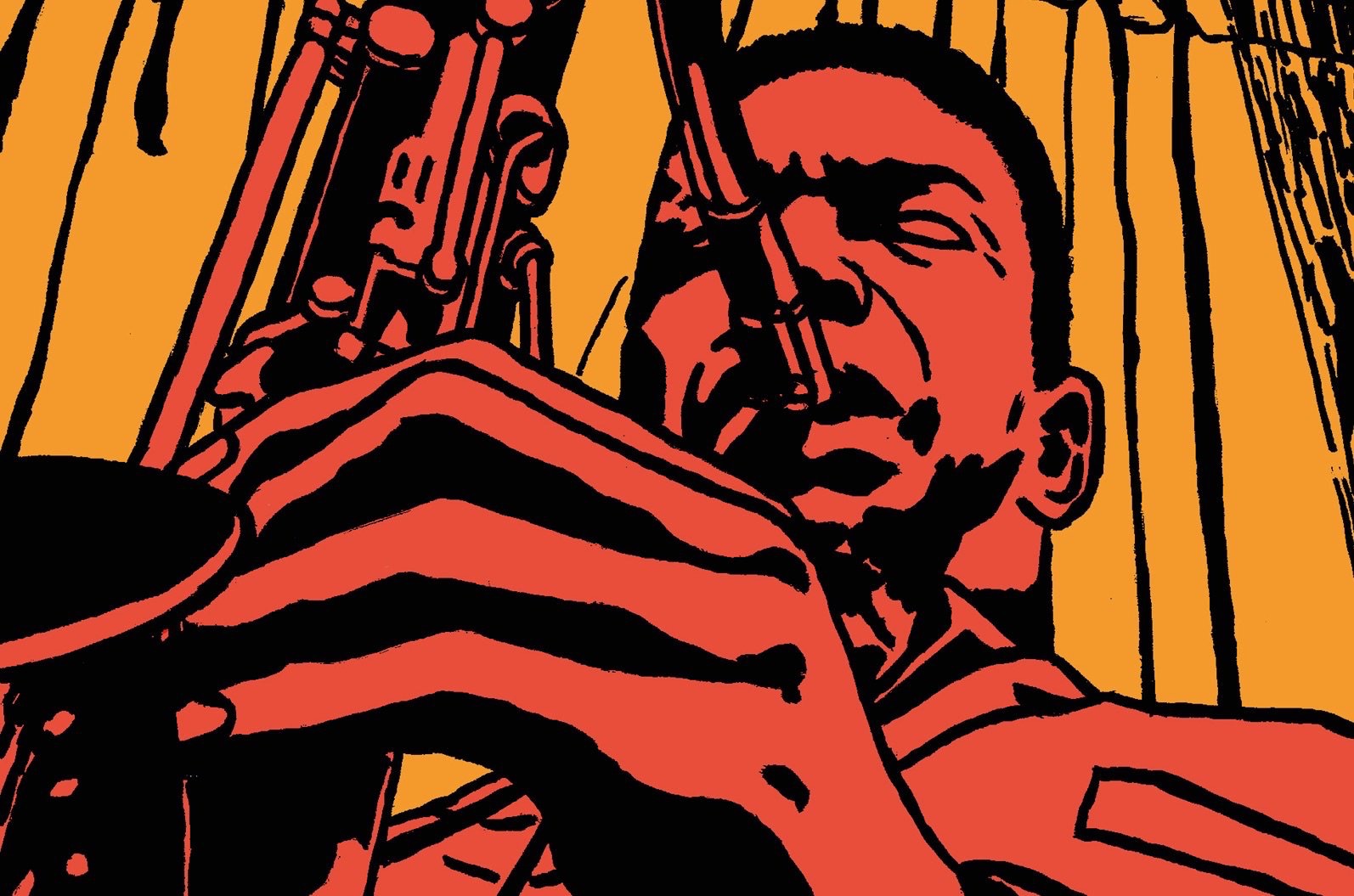 The choice of artist for the star of the show this week was simple. All morning I had been playing John Coltrane records. Every time I do, I am entranced and left in awe of what this great man achieved so many years ago and what an influence he has had on other musicians since. In 2018, lost tracks were discovered and collected onto the album Both Directions At Once and it seemed appropriate to return to this must-have music, recorded on 06 March, 1963, and featuring Coltrane’s classic quartet of McCoy Tyner on piano, Jimmy Garrison

on bass, and Elvin Jones on drums. The seven tracks include five Coltrane originals (including one of his most popular compositions, Impressions) and two standards, Nature Boy and Vilia. We love this record on Cosmic Jazz but almost anything by Coltrane is an essential listening experience. Perhaps the more significant matter is where these recordings stand in Coltrane’s œuvre, and how they illuminates his art and the trajectory of his too-brief career. Coltrane died, at the age of forty, in 1967 but not before leaving a legacy of music that moves between the melodic and the monumental – all with his unique tone on both tenor and soprano saxophones. Our view is that this lost album presents Coltrane in transition, and so is somewhat restrained compared with the live performances recorded around the same time. However, this makes it a great place to start a Coltrane journey. If you do not possess it in your collection, click the Mixcloud tab to hear the track One Up, One Down and find out why you need this record – best chosen on vinyl and in the two disc set which features seven interesting out-takes.

So often selections revolve round ‘shuffle’ tunes that I have come across recently. This week, vocalist Cecile McLorin Salvant appeared with a tune I have not played on the show before – Growlin’ Dan. Salvant certainly does some growlin’ of her own on the tune to make the point of what Dan must have been like. What a strong and versatile voice! It also seemed appropriate to play one of her records to respect Lawrence Leathers, the drummer on this excellent album who sadly died recently.

There have been references on the show recently from jazz to the continent of Africa – for example, Randy Weston on last week’s show. There was more this week. Firstly, from Max Roach and his essential 1960 album We Insist! Freedom Now Suite. A prominent part in the tune All Africa is played by the Nigerian conga player Michael Olatunji who in the introduction answers Abbey Lincoln’s voice  as she chants the names of African tribes. Throughout the tune he is the leading drum voice.

The second came from pianist and composer Horace Parlan. The title of the number makes the purpose plain to see – Home is Africa, It was recorded for Blue Note Records in 1963, originally on an album entitled Happy Frame of Mind, but I have it on a Blue Note compilation called African Rhythms.

Eastern European jazz has different priorities but still stretches out across continents both for its musical influences and for some of the personnel in the bands. The latter is illustrated by the pianist Adam Jarznik Quintet, whose newly released record On the Way Home features guitarist Mike Moreno. Jarznik himself was trained at the Katowice School of Music. From the Czech Republic came sax player Ondrej Strevacek whose album Sketches is one of three currently available at Steve’s Jazz Sounds . The title tune features some strong piano and sax playing, a powerful number.

The debate from last week regarding Cinematic Orchestra was offered more evidence by the inclusion of the title track from the recently released album To Believe. Look at the informed and perceptive comments from Neil in the notes to last week’s show to find  his guidance on how to listen to this album and how his perception of it was changed.

To end there was a sample of Jane Bunnett, whose excellent Cuba – North American collaboration preceded the Buena Vista Social Club with an outcome that in my opinion was superior.