This week’s Cosmic Jazz featured all new music from Neil, back from Singapore for a few weeks. Check out the sounds by clicking the Mixcloud tab (left). Most of the tracks played have been released in the last few weeks, with our featured album the latest from Brazilian icon Marcos Valle. We began with one of the many

standout tracks from his new album Sempre (translated as Ever in Portuguese): Odisseia begins with a drum break lifted from Stevie Wonder’s Superstition and then goes on to reflect the full gamut of his recent revival with one of our favourite labels, Far Out Records. Production on this album is from Daniel Maunick, son of Bluey from the UK’s finest funk band, Incognito, and that Azymuth-like sound reflects the presence of their long-serving bassman, Alex Malheiros.

Up next was another brand new release – this time from prolific pianist and man with the longest beard in jazz, Jamie Saft. His new album has a definite spiritual jazz vibe and Saft is ably abetted by an outstanding quartet of deeply exploratory musicians: Saft, longtime collaborator Bradley Jones on bass, the wide-ranging drummer/percussion master Hamid Drake, and legendary saxophonist David Liebman, whose most famous tenure was with Miles Davis in the 1970s. This is a fine album and it’s a great introduction to Saft’s extensive catalogue.

UK keys player Joe Armon-Jones is making big waves at the moment with an eagerly-awaited second album coming up on the horizon. Perhaps as a taster, he’s just released a download and 10 inch single called Icy Roads (Stacked) and – as the cover art suggests – it has more than a nod to Thrust-era Herbie Hancock. We like the confidence that exudes from this track – the Rhodes piano is well to the fore (just as on Valle’s Odisseia) – and we’re looking forward to the new album. Armon-Jones is currrently on tour in the UK and will be at Gilles Peterson’s new We Out Here festival in Cambridgeshire from 15 August.

Recently re-issued on vinyl is the excellent album Windows from Jack Wilkins, first released on the Mainstream label in 1973. Wilkins is an undersung guitarist who could easily have been as successful as – for example – Gabor Szabo – but although he has released a number of albums and appeared as a sideman on many recordings, most people won’t have heard of him. Windows has now be re-issued by Wewantsounds label and it’s well worth a listen. It’s a mix of covers (including our featured track, Freddie Hubbard’s Red Clay) and originals, with Red Clay being noted for its use as a sample – most notably on the superb Midnight Marauders album from A Tribe Called Quest.

Phil Ranelin is noted as the trombone playing leader of The Tribe, a Detroit avant garde jazz ensemble devoted to raising black consciousness, alongside this co-founding Tribe Records and releasing several albums as a leader in the 1970s. The Tribe project ended but interest in Ranelin has resurfaced in recent years and he’s now back in the UK and working with one of our longtime CJ friends, UK drummer and producer emanative. The track we featured is – like the Armon-Jones tune – a download and 7 inch single and currently available on Bandcamp before the launch of the new album. Like other emanative projects, all proceeds will go to Gilles Peterson’s Steve Reid Foundation, of which Nick Woodmansey (emanative) is a trustee.

Time Grove are one of the many interesting bands we have come across through Bandcamp. Hailing from Tel Aviv, Time Grove are a collective guided by pianist Nitai Hershkovits alongside one third of Buttering Trio, and newly signed Stones Throw recording artist, Rejoicer. Their sound is varied track to track – delicate yet powerful; sonorous yet uplifting. The full line-up also features reed player Eyal Talmudi, drummers Roy Chen, Amir Bresler and Sol Monk, keyboard master Bemet, trumpeter Sefi Zisling, and guitarist Yonatan Albalak. Find out more on their Bandcamp page right here.

It was back to Marcos Valle for another tune from the new album. This time featuring Valle’s distinctive vocals and some lovely summery guitar, Alma (or Soul) is a further indication that this album is perfect summer listening – even if you’re not on a Rio beach with a caipirinha.

Our penultimate track is something of a curiosity, but one that’s worth listening to. It’s from pianist Randy Weston who we’ve featured on the show in recent week. Uhuru Afrika is an album  recorded in 1960 and originally released on the Roulette label and it features lyrics and liner notes by the poet Langston Hughes. It was banned in South Africa in 1964 (as was the more celebrated Freedom Now Suite from Max Roach) and it’s one of the finest (and earliest) combinations of African rhythms with jazz in a 24-piece big band that includes 14 horns, one guitar, two bassists, three drummers, and three percussionists. Martha Flowers and Brock Peters took vocals on our featured track African Lady, with Melba Liston responsible for the charts. The orchestra featured Clark Terry, Slide Hampton, Yusef Lateef, Shahib Shihab, Kenny Burrell, Max Roach and Babatundi Olatunji. The album has been made available once more on vinyl and you can find it here on Cornbread Records. 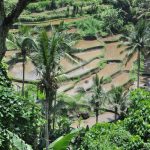 We ended CJ this week with an intriguing piece from Gamelan Semara Ratih, probably the finest gamelan orchestra in Ubud, Bali. The story behind this music is worth exploring: Lapanbelas is Bahasa Indonesian for ’18’ and this music is a gamelan interpretation of the Steve Reich composition Music for Eighteen Musicians, which was introduced to Semara Ratih by Evan Ziporyn, a New York musician studying in Bali. The music is now performed on a bi-weekly basis by the group at their regular concerts in Ubud. You can download the full track right here on Bandcamp.