Over this year, here on Cosmic Jazz we have been celebrating 80 years of Blue Note Records. Neil, however, has pointed out that there is another important celebration that we need to acknowledge – namely 50 years of ECM Records.  As a result, a significant proportion of this week’s programme consists selections from that rich catalogue.

To begin, though, I like to include references to places or music that I have seen and heard. Recently, I was in the beautiful city of Amersfoort in the Netherlands.  By accident we came across the amazing Awaze Ethiopisch Restaurant. Not only was the food excellent and different to what is available on most high streets and the service friendly and helpful, but there was Ethiopian music playing throughout. It seemed appropriate, therefore, to play an Anglo-Ethiopian collaboration with the father of Ethiopian jazz, Mulatu Astatke playing with British group the Heliocentrics. This intriguing project is a collaboration that really works as drummer Malcolm Catto ensures that Astatke’s compositions are not watered down or compromised with unnecessary dance grooves. Instead, the music frequently combine his own vibraphone and conga playing with the distinctive sound of the lyre-like Ethiopian krar.

ECM (or Editions of Contemporary Music) was founded by Manfred Eicher in Munich in 1969 and, as producer, Eicher has overseen  thousands of recording sessions – many with Norwegian recording engineer Jan Eric Kongshaug, who sadly died early in November this year. ECM albums have often been stereotyped: cool, minimalist covers often with a black or grey background, fine photography and a clean non-serifed typeface. This often appears to continue through to both the music itself and Kongshaug’s characteristic production values. But the variety of the music on the label belies this simplistic assessment with a truly eclectic range of artists whose cultural, geographical and ethnic diversity demonstrates a musical vision that knows few boundaries. Over the next few months we shall be featuring some of our favourite artists with tracks that will show the breadth of Eicher’s musical vision. 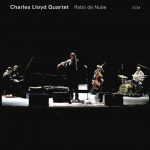 First up was someone from the label who needs no introduction to Cosmic Jazz followers, namely, Charles Lloyd. Why do we keep returning to his live album from 2008, Rabo de Nube? The answer is simple: it is so good and includes such fine musicians performing at the peak of their powers. There is the leader Charles Lloyd on tenor, flute and Hungarian tarogato,  now in his eighties and still going strong, on tenor and flute, the wonderful and original Jason Moran on piano, Reuben Rogers on double bass and Eric Harland on drums and percussion. Recorded live on 24 April 2007 at Theater Basel in Switzerland this is an essential album with one track in particular that we have featured many times on CJ – the stunning Booker’s Garden.  But it was time for a change and so we focused on the opening track Prometheus.

A cross-cultural exchange is provided by Tunisian-born oud player Anouar Brahem and his 2017 ECM record Blue Maqams. Brahem aimed to blend, as he had done previously, the sounds of the oud and the piano and to in his words attempt the impossible to associate this delicate instrumental combination with a real jazz rhythm section. For this section Brahem soon decided who he wanted – two jazz titans in UK-born Dave Holland on double bass and Jack DeJohnette from the US on drums. For the piano, it was Manfred Eicher who introduced him to the playing of British pianist Django Bates, with whom Eicher had recently made a record. Anouar Brahem had not come across Bates but on hearing his music  was soon to select him. The recorded outcome is an album that’s a perfect blend of Arabic and jazz sounds.

Next was a break from ECM with a tune from the late Polish trumpeter Tomasz Stanko and an album he recorded for the Polin Museum of the History of Polish Jews. There are five superb tracks on this limited edition CD, featuring pianist David Virelles from was to become Stanko’s American quartet and guest Ravi Coltrane. But Stanko did, however, produce some of his finest work for ECM and we shall feature some of this output in upcoming shows. Stanko’s playing was always so clear and distinctive and I am pleased that I saw him once at the Norfolk & Norwich Festival playing as the sun set outside a medieval church in the centre of this ancient city.

At a subsequent Norfolk & Norwich Festival there was another memorable evening featuring an ECM artist.  The Norwegian drummer/percussionist Thomas Stronen has made over sixty albums but Time Is A Blind Guide must be up there as one of the very best. This is music of mesmerising delicacy, yet it has such strength and power. There’s an interesting range of instruments that includes UK musicians Kit Downes on piano and Lucy Railton on cello, as well as Haken Aase on violin, Ole Morton Vagan on double bass, Siv Oyunn Kjenstad and Steinar Mossige providing further percussion to support Stronen. This is one of our ECM favourites – highly recommended.

The show this week ended with Jan Garbarek, an ECM stalwart from the outset and one of the most prolific recording artists for the label. His 1987 album All Those Born With Wings is unusual in that it’s a completely solo performance with Garbarek playing all instruments. We shall be returning to Garbarek in future programmes as we explore Manfred Eicher’s musical vision, including releases on his New Music imprint that introduced listeners to many new contemporary composers including Steve Reich and Arvo Part.

One significant feature of the label is Eicher’s championing of vinyl and CD – until recently, the only way to hear an ECM recording was to acquire it in a hard copy format. But last year, pretty much the entire catalogue appeared on streaming services – a necessary counter to the unauthorised distribution of ECM titles on YouTube and file-sharing sites. Here on CJ, we’d suggest that the best way to listen to this most diverse of catalogues is still through either physical medium. Put on an ECM record or load the CD, wait for that characteristic five seconds before the music begins and revel in the crystalline sounds of an Erik Kongshaug production.