Cosmic Jazz this time round presents a much shorter show but one that pays tribute to two artists we have admired and revered since the start of the show, over fifteen years ago. Mtume and Lloyd McNeil both died earlier this month and we honour them with four wonderful tunes. 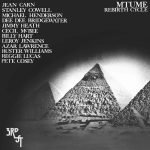 We begin our tribute to drummer and percussionist James Mtume, by playing the sort of tune we often use to end the show. It’s not jazz but R’n’B, and it was a bonafide global chart hit in 1983 from a former jazz musician who ranged across the spectrum of contemporary, spiritual jazz and played on numerous records, including with Miles Davis at his most ‘out there’ electric phase in the 1970s. But Mtume was much more than an accomplished jazz sideman. no less. Born James Forman in 1928, Mtume was the son of saxophonist Jimmy Heath (who died last year at the age of 93) but he was raised by his stepfather – also James Forman, a saxophonist who was nicknamed ‘Hen Gates’ – which in turn became the name of a tune on Mtume’s hugely influential Alkebu-Lan (Land of the Blacks) album. For more on this, check out this Cosmic Jazz post from August this year. The drummer actually made his recorded debut with a remarkable lineup: the album Kawaida (1970) was credited to his uncle Albert Heath, but four of the five tracks were written by Mtume and the band included Herbie Hancock, Don Cherry and Buster Williams. This is a superb record and has been recently re-released – check out Maulana here.

Back to the 1970s, and when Mtume moved to New York be began to get ‘A list’ work, appearing on records by McCoy Tyner, Freddie Hubbard, Lonnie Liston Smith and more with his writing becoming an ever more important feature – check out the Lonnie Liston Smith version of Mtume’s beautiful tune Sais (Egypt). Mtume was then signed by Miles Davis (who knew a good drummer when he saw one), performing and recording on landmark releases like On the Corner (1972), Get Up With It (1974) and the live in Japan records from 1975, Agharta and Pangaea. Mtume was also recording with his own ensembles – which brings us back to Alkebu-Lan (recorded live at the East Club in downtown Brooklyn in 1972), and the studio-based follow up Rebirth Cycle (recorded in 1974 but released three years later).  Alkebu-Lan is claimed as the original name for the continent of Africa and this important record is full of references – both spoken and musical – to African-American origins. The Umoja Ensemble was fairly large with 15 players – and result in this live recording is thick and rather muddy – but the message of a spiritual freedom is clear. The music is an amalgam of different jazz genres – you can hear call and response chants, big band jazz, be-bop and free jazz all meshed together in a kind of organised chaos. This is music to immerse yourself into and emerge with an understanding of the way in which Black consciousness and jazz have intertwined over the years. Rebirth Cycle (1977) is a better album in many ways: there’s an extended take on Sais and a remarkable lineup of musicians, including Mtume’s father Jimmy Heath, vocalist Dee Dee Bridgewater and saxophonist Azar Lawrence. Yebo features basically the Miles Davis band of the time, along with Tawatha Agee on vocals. This not an easy record to find and it has never been reissued on either CD or vinyl – the only copy on offer on Discogs is priced at £300 – so Neil will be hanging on to his treasured copy! In a 2018 interview with fellow percussionist Adam Rudolph, Mtume noted that when he was recruited to Miles’s band, Davis had said to him “You are my Tony” referring, of course, to drummer Tony Williams. Mtume was influential in extending the range of the hand drummer in a band: instead of providing just additional colour, the percussionist was literally at the centre of the stage – in live performance with Davis, the two musicians would play side by side. There are just a few Miles Davis compositions simply titled after the musicians that inspired them – John McLaughlin, Dual Mr Tillman Anthony – and Mtume. We’ve chosen a short version from the live in Japan concerts that produced the Agharta and Pangea albums but the original 15 minute version is here on Get Up With It. You can hear how the percussionist is at the centre of the music alongside the wah wah trumpet of Davis. 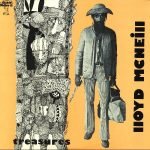 Flautist and more Lloyd McNeil (1935-2021) deserves recognition from Cosmic Jazz. He was not just a jazz artist much admired by us, but also a painter and friend of Picasso who designed his own album covers, a music anthropologist, a poet and a professor at Rutgers University in New Jersey. The album Treasures was released originally in 1980 on McNeil’s own Baobab label in New York. but – like five other of his albums – has been re-released in all formats by the British label Soul Jazz Records. Treasures combines deep spiritual jazz with Brazilian rhythms and melodies, McNeil having spent many years involved with Brazilian musicians. This album includes the Brazilian musicians Nana Vasconcelos, Portinho and Dom Salvador alongside American jazz artist, including Cecil McBee (who also appeared on Yebo above). The tune Salvation Army illustrates the fusion perfectly with the percussion of Vasconcelos to the fore alongside Lloyd McNeil’s jazz flute. 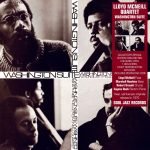 Washington Suite is another Lloyd McNeill album available through Soul Jazz Records – on coloured vinyl too! It is a deeply spiritual album, first released in 1970 on another of McNeil’s labels – Asha Records in Washington DC. Originally commissioned for the Capital Ballet Company, it’s another example of how McNeill was active in multiple spheres. He grew up in the years of the Civil Rights Movement and the ideals of the Movement are imbued in his music. He was one of a number of US jazz musicians who moved to France in the 1960s which is how, while playing music on the Mediterranean coast, he met Picasso. Over the years he played with a number of prominent musicians, including Nina Simone, Eric Dolphy, Mulatu Asatke and Sabu Martinez. McNeill’s global travels took him to Brazil and West Africa informing and influencing both his music and teaching. He was a man with an impressive range of abilities and achievements who used them to promote the ideals of many Black activists at the time of self-sufficiency and empowerment.